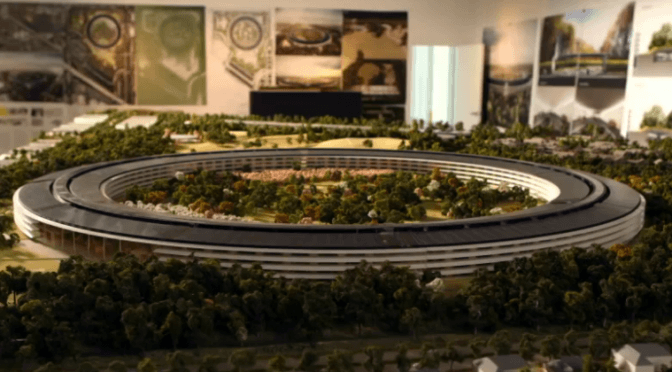 Steve Jobs had a vision in 2013 to build the best office in the world for #Apple & now this campus in near completion in Cupertino. Apple is expected to move in to their new headquarters in 2017.

Apple is planning to use 100 % renewable energy in this new building, & have designed it to utilize a combination of solar & fuel cell technology to meet its energy demands. Apple is planning to distribute the additional electricity generated to the national grid.

This building will be directly connected to underground express highways to enable efficient transport for Apple staff, we can bet that even aliens would be amazed to see this design if they confuse this as a spaceship.

Steve Jobs vision depicted in the video below:

Current progress:
Apple has made quite a lot of progress on its under construction “Campus 2” set to become the company’s new headquarters when complete around the end of the year. Since last checking in a month ago, a video update published today by Matthew Roberts for June shows continued progress on the roof of the main circular spaceship building, including a look at the heating and cooling systems installed throughout, and what looks to be some new outdoor areas surrounding the entrance of the underground theatre.

One thought on “Apple Spaceship Campus”