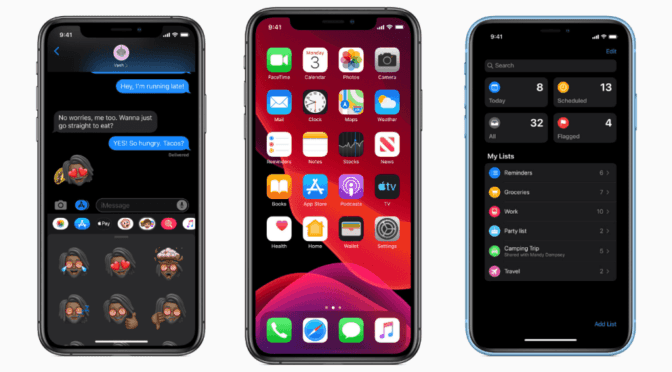 Apple has finally revealed the new iOS 13 features Dark Mode & iPad OS at WWDC 2019. #CatchItFirst
Developer beta of iOS 13 is available now, with a public beta available in July. A final release is expected in the autumn.

Apple also introduced a new Apple social login, which works in a similar way to that used by Google and Facebook but “without all the tracking”. Users can hide their email addresses from apps, using Apple’s random email address generator, which creates unique addresses that forward emails to your real address.

The developer beta of iOS 13 is available now, with a public beta available in July. A final release is expected in the autumn.

Apple has now introduced a new iPad OS dedicated to harness the true power of iPads.

Flash drive and memory card support has been finally added to the Files app, as well as direct camera import into apps such as Adobe’s Lightroom.
Apple is also adding desktop-class browsing to Safari on the iPad, which automatically sizes true desktop sites to the screen and makes them touch-friendly, instead of sticking users with a blown-up mobile site.

Immediate changes are tighter home screen app grids, the ability to pin widgets on the home screen, and new copy and paste gestures – three-finger pinch to copy, spread to paste and swipe to undo.

Most of the changes are to make the iPad more like a desktop computer, particularly Apple’s large iPad Pro. The app expose function is now on the iPad, similar to the Mac, multi-window compatibility has been enabled for placing two Word documents or similar side-by-side, and multiple slide-over apps can be stacked and switched between via swipes. There are also 30 new keyboard shortcuts. iPad can also be used as a dual monitor for your Mac which sounds uber cool.

The developer beta of iPad OS is available now, with a public beta available in July. A final release is expected in the autumn.

Fans have been trolling Apple for the 999$ Monitor Stand, Pricey Apple Game at it as always 😉