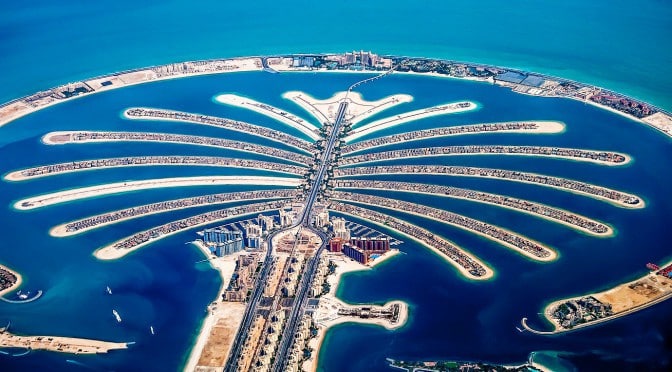 Dubai is a cosmopolitan oasis, a futuristic cityscape that towers over the Arabian Desert. This is a city of superlatives, home to the world’s largest dancing fountain; tallest building (Burj Khalifa); only 7-star hotel (the Burj al-Arab); largest artificial islands (the Palm Islands); and largest natural flower garden (the Miracle Garden). Rent a dune buggy for a desert adventure, bargain at the open-air market, or cheer on your favorite humped hoofer at the Camel Race Track.

Forget the seven-star property, the world’s tallest tower, manmade islands, underwater hotels and buildings that spin like a Weeble with an inner-ear infection, what the city of Dubai really knows how to create is headlines. This little fishing-village-that-could has built an entire tourist industry out of piquing people’s curiosity. Its unstoppable, finely tuned PR machine has managed to overcome every downside (how often do you hear that Saudi Arabia, Iran and Iraq are right next door?) to make the city a must-see location. And that’s despite the fact that the region is full of sunny locales that have a lot more to offer — Jordan, with its millennia-old civilization, the Red and Dead seas, incredible desert landscapes and the glories of Petra — but generate a lot less interest.

That being said, Dubai has its virtues, so if you find yourself with 24 hours in the city, you’ll have no shortage of things to do.

This is a city of the super rich and the super poor. You are unlikely to see a place where the divide between the “have nots” and the “have yachts” is so apparent. The local-born Emiratis, who make up about 12% of the population, are typically extremely wealthy, but the town was built on the backs of a huge working-class population predominantly from the Indian subcontinent and from less prosperous areas of the Gulf. Sitting between the two groups is a burgeoning band of expats, mostly from the West, who are profiting to varying degrees from the city’s modern day Gold Rush.

The thing about shopping in Dubai is that the actual shopping is average, but the experience is intriguing. If you’ve shopped in New York or Paris, Dubai’s malls will be a disappointment. Most of the shops are familiar and no cheaper (though you may find the odd bargain on electronics) than in other places in the world. But store trawling is only the tip of the Dubai shopping experience. Malls in this city are realizations of unrestrained fantasy, offering surreal attractions to lure you (and your credit card) in.

Dubai is known for really cheap gold — but you’ll have to haggle for it. Whether or not you’re ready to buy, a stroll through the dazzling Gold Souk is a must. The stores also offer platinum, diamonds and occasionally silver, and the government keeps tight control over the quality of all the merchandise, so rest assured that your purchases will be genuine. (The same cannot be said, however, of the street vendors outside hawking “genuine fake” watches and “Guuci” handbags.) If something in the window catches your fancy, be sure to barter — persistent protest capped with a walkaway will get merchants to drop their asking price by as much as half.

The most audacious of all of Dubai’s megaprojects is the collection of reclaimed islands just offshore. First came the palm-tree shaped Palm Jumeirah, which the city bills as the eighth wonder of the world. And there are two more islands, Jebel Ali and Deira, in varying stages of development. In an outlandish stroke, Jebel Ali will feature a breakwater that spells out a line of poetry by Dubai’s ruler Sheikh Mohammed bin Rashid Al Maktoum (“It takes a man of vision to write on water”). Last, but certainly not least, is The World, an archipelago of islands that forms a world map in miniature; the islands are for sale, so if you can afford it, you can buy a “country” for yourself.

A visit to the desert isn’t as peaceful as you’d think. The desolate Sahara this is not. The easiest way to get at the dunes outside the city is on a four-wheel-drive safari. The tours are incredibly popular, but your enjoyment will depend on your tolerance for a) being thrown around the sand in a Jeep, b) touristy BBQs in the desert replete with a belly dancer and henna painting services and c) lots of other tourists. If you can handle all three, then Blue Banana has a number of expeditions on offer. The same outfit also has hot-air balloon flights over the sand at sunrise — a statelier desert experience. If you just want to see some sand without vertigo or nausea, then head out to the plush desert escape Bab Al Shams. Here you can sit on the rooftop and enjoy a cocktail as the sun dips below the dunes.

One thought on “Exploring Dubai – City of Gold”