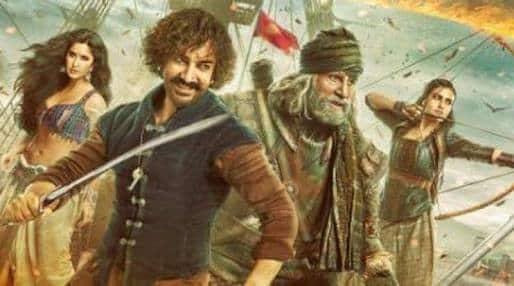 And if you thought the motion posters looked a lot like Pirates Of The Caribbean – Twitter did, anyhow – the trailer couldn’t get more Pirates-ey and Aamir Khan’s character Firangi Mullah couldn’t be more Jack Sparrowish. The opening scenes of the trailer drop us into the epicentre of the storyline – the Thugs are gearing up to fight the East India Company, which came to India to trade but by 1795, the year the film is set in, had begun to rule. Soon, Amitabh Bachchan makes a grand entry with lots of action and dialogues delivered in his signature baritone. He plays Khudabaksh, also called Azad, – Thug commander of the sea. Big B’s second is deadly archer Zafira, played by Fatima Sana Shaikh, the determination in her kohl-lined eyes equalled by her skill with the bow and arrow. She means business.