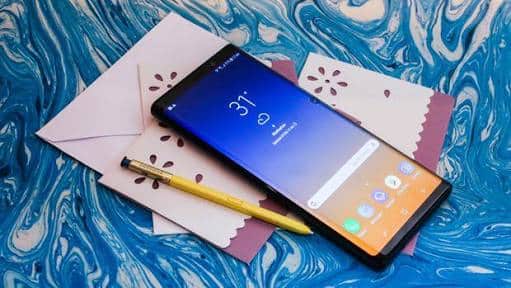 The Samsung Galaxy Note 9 is here. The years of evolution have resulted in a phone that looks more or less like its predecessor, but with some serious improvements in the one feature that makes this phone unique: the S Pen stylus. This is also the largest Samsung Galaxy Note phone ever, with the largest screen size and battery too.

The phone is available in four colours: midnight black, metallic copper, lavender purple and ocean blue, the last being the marquee colour this time. So with the ocean blue version, Samsung is packing in a yellow S Pen. On the off-screen, this even writes in yellow.
There are a lot of small features like this that add real value to this new phone. The 6.4-inch display itself is quad Super AMOLED (2960x1440p) at 516ppi. It is stunningly sharp as you have come to expect from Samsung. The speakers are tuned by AKG.

The best feature of Note 9 is undoubtedly its S Pen stylus. The S Pen stylus has been there for many years now. But with the Note 9, the S Pen goes autonomous. A 40-second charge inside the phone lets its low-power Bluetooth stay alive for upto 30 minutes before coming back into the phone. This opens up endless possibilities.

The camera on the Note 9 is a combination of a 12MP telephoto and a 12MP wide lens. The F1.5/F2.4 combination on the wide lens makes it great for low-light photography.

The Samsung Galaxy Note 9 will sell in most of the world with a Qualcomm Snapdragon 845 processor. In India, as is the tradition, Samsung will ship with a octacore equivalent of its own Exynos processor. Still, the Note 9 will be a very powerful phone given that it will offer a minimum of 6GB RAM and will have a water cooling system inside along with a carbon fibre interface for faster cooling.
More over, Samsung is packing an AI-based performance adjuster that keeps tab on heat and performance. All this indicates, that given its screen quality and size Samsung hopes this phone will be preferred by hard core games.

Samsung Dex. The Note 9 can switch to Dex mode and power a full monitor offering desktop computing even without a dock now. For a lot of users, this would mean less money spent on a desktop computer at work, and thus make the Note 9 a more valuable proposition. The Note 9 is also compatible with a whole bunch of accessories that adds value to this mode.