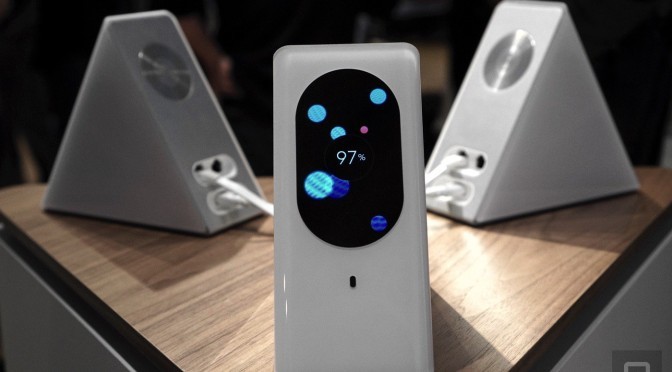 #FirstCrush A tiny startup made a big splash this week by pledging to deliver a wireless Internet service fast enough to replace your home broadband connection.

Starry is taking on cable broadband with a wireless service that promises to deliver 1 gigabit per second downloads.

Starry, a company based in New York and Boston, on Wednesday unveiled a 1-gigabit Internet service, which will launch with a trial in Boston over the summer. That’s about 10 times faster than the average home Internet connection and speedy enough to let you download a two-hour high-definition movie in 25 seconds.

If the promise holds true, Starry could offer you a viable, potentially superior, alternative to the broadband service provided by your local phone or cable provider. The company believes it can undercut traditional broadband providers because it doesn’t have to dig up streets to install physical lines. It would bring much needed competition and higher speeds. What’s not to like?

It turns out that Starry’s promise may be too good to be true. The service is based on a type of super-high radio frequency that can only travel over short distances and is easily distorted by walls or even rain. While this technology has been used to provide fat Internet pipes to businesses, its technical limitations make it expensive to deploy.

But Starry CEO Chet Kanojia, best known for his failed attempt to shake up the broadcast industry by bringing live-streaming TV services to consumers through a company called Aereo, believes he’s found the answer.

“The technologies we’re using have been around for a long time and are dirt cheap,” he said in an interview. “But no one else has stitched them together the way we have.”

Starry is taking advantage of technological advances and off-the-shelf components used for Wi-Fi and satellite technology to work around these issues.

The Starry Beam radio will sit on atop a building to capture incoming signals. While a traditional provider installing cable or fiber for broadband might spend $2,500 for every home it hooks up, Starry can do it wirelessly for $25 per home, Kanojia said. That’s thanks to a combination of tricks to amplify and direct the signal. He said the technologies allow him to transmit a signal 1 to 2 kilometers away.

Starry Beam radios will sit on top of buildings to capture the incoming signals. They’re then transmitted to the Starry Point, another box that sits outside of the customer’s window in their house or apartment, which then pipes the signal inside to yet another device called the Starry Wing. Starry Wing then broadcasts the connection throughout the home.

Starry hasn’t offered pricing details on any of these products, but Kanojia said customers will not be responsible for the cost of the devices. Instead, pricing will be bundled into the service.

That all sounds great, but many are hung up on the airwaves that Starry plans to use.

Radio waves work like this: Higher frequency signals allow you to carry a lot of bandwidth, but at shorter ranges. That means you have to place more radios closer together. Wireless companies prefer to use lower band spectrum because they don’t have to build as many cellular sites and because the signals can go through walls.

Starry is employing radio waves that range between 37 gigahertz and 39 gigahertz utilizing a technology called millimeter wavelength. At that high rate, walls and even heavy rainstorm or foggy mist can cause disruptions. In comparison, many of the US carriers use spectrum in the 700 megahertz band.

Some experts say that Starry is likely using the right technology to overcome technical hurdles, but they’re skeptical the company can deliver the reliable performance at low costs.

Beyond technology, the bigger hurdle will be the cost to deploy the network, said Khurram Sheikh, president of SiBeam, which is working on chips that can tap into millimeter wavelength technology.

It’s all about real estate

One of the biggest expenses will be finding enough rooftops for Starry to build a dense network. While the radios are relatively small and use little power, the company still needs to negotiate deals with building owners for access to rooftops and other places to put the equipment.

“All wireless providers are real estate plays,” Thomson said. “The success of our business depends less on the technology and more on our ability to negotiate great long-term real estate deals.”

Kanojia isn’t too worried. He struck similar deals to get radios up for its Aereo service, which plucked broadcast TV signals and sent them down to its customers.

“That’s just a process you have to go through,” he quipped.

Many in the wireless community, especially those working on 5G, which also plans to use higher frequency radio signals, will be watching Starry closely.

“We like to see others innovating in this area,” Sheikh said. “If a startup shows something real, it will accelerate things and we’ll get more of this technology to market faster.”